Laser induced breakdown spectroscopy (LIBS) has been recognized as a powerful and versatile technique for materials analysis, especially for the applications in which real-time analysis, high sensitivity, minimal or no sample preparation, measurement in atmospheric environment, portability, and standoff measurement capability are desired. LIBS measurements are known to be highly reliable if the measurement parameters are properly determined. 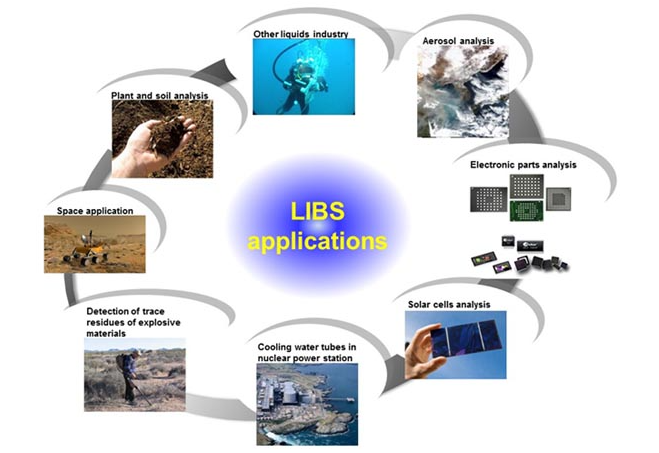 Metal recycling is important for saving resources and reducing energy consumption and environmental pollution caused by the production of metal. To increase recycling rate of used metal resources, a metal sorting system which can automatically identify different kinds of metals from mixed metal scraps and collects separately needs to be developed. LIBS is regarded as a promising technique for real-time sorting of scrap metals due to its capability of fast multi-elemental and in-air analysis. The spectral intensity of LIBS plasma can provide qualitative and quantitative information on the elemental composition of the target. Short measurement times of LIBS in the order of microseconds and various optical elements allow to measure moving objects which are randomly distributed on conveyor belt. In addition to, LIBS has made a great step forward in recent years while going from the laboratory to the industrial field not only metal sorting but also inline process monitoring.

Using advantages of LIBS, we have made a pilot system that can classify the scrap metal as shown in Fig 2. Until now, there has been no case applied to recycling technology using LIBS in Korea, and we are challenging for first time in our laboratory and collaborative laboratory. The system consists of actively studying techniques which are 3D shape measurement, LIBS, data processing algorithm and pneumatic sorting system. The detailed mechanism of the system is as follows;

(1) The scrap metals are fed into the conveyor belt with constant speed.

(2) The shape of scrap and point of laser irradiation are measured by 3D shape measurement system.

(3) LIBS irradiates the laser using the information which is measured by 3D shape system and acquires the plasma spectrum.

Role: Acquisition and analysis of plasma spectrum generated after laser irradiation to the scrap metals at arbitrary position and height on moving conveyor

(4) In signal processing, scrap metals are classified by using statistical analysis and algorithm. 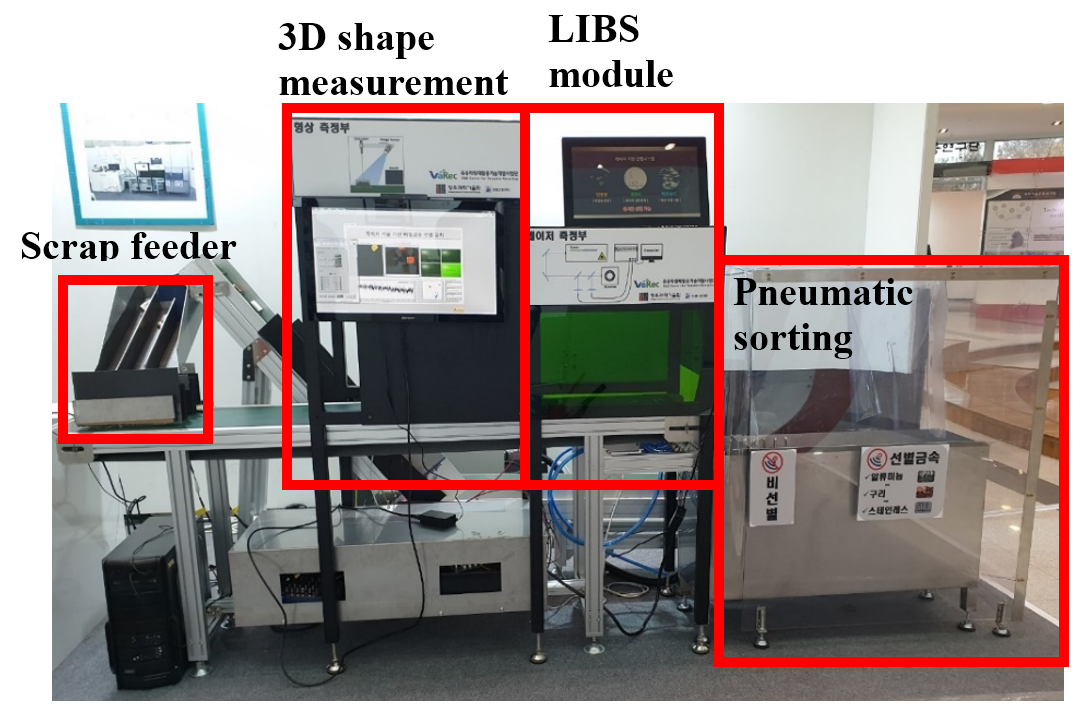 Similar metals such as aluminum alloys, copper alloys, cast steel and stainless steels are characterized by nearly the same constituent elements with slight variations in elemental concentration depending on metal type. This works reports a method for signal processing which ensures high accuracy and high speed during similar metal sorting by LIBS. In our proposed method, the original data matrix is substantially reduced for fast processing by selecting new input variables (spectral lines) using the information for the constituent elements of similar metals. Principal component analysis (PCA) of full-spectra LIBS data was performed and then, based on the loading plots, the input variables of greater significance were selected in the order of higher weights for each constituent element. The results demonstrated that incorporating the information for constituent elements can significantly accelerate classification speed without loss of accuracy.

Compound semiconductor films of copper indium gallium diselenide (CuIn1−xGaxSe2 [CIGS]) have recently received tremendous interest as the emerging materials for photovoltaic applications due to compelling technical benefits that include reduction of material usage and high photoconversion efficiency. Much recent research on CIGS has highlighted ways to improve the optoelectronic properties of CIGS absorber films and their dependence on the chemical composition of the layer. 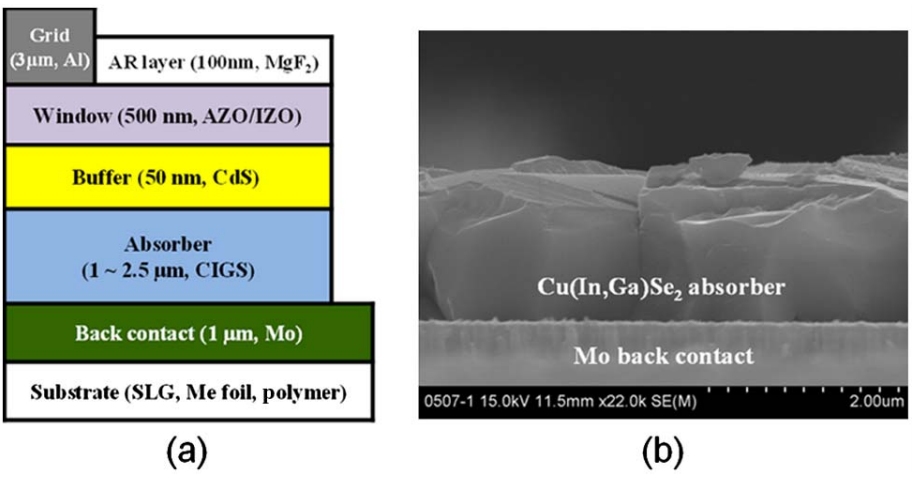 Fig. 4 (a) Illustration of the configuration of a CIGS solar cell. (b) Cross-section SEM image of CIGS absorber layer.

Although several factors influence the efficiency performance of CIGS solar devices, their targeted and consistent performance characteristics are achieved from a rigorous control of the chemical composition of the CIGS absorber film tailored for its energy band structure. It is known that the efficiency of CIGS solar cell is highly influenced by the concentration ratio of constituent elements such as Ga/(Ga + In) and Cu/(Ga + In) ratios. LIBS can be a viable technique for real-time monitoring of material composition in the CIGS solar cell industry. The uncertainty of reference concentration is expected to be reduced by using samples of known compositions.

2. The ablation characteristics of CIGS changed drastically depending on laser wavelength

The performance of CIGS thin film solar cell depends sensitively on the depth profiles of constituent elements and thus there exists a strong demand for a fast and accurate depth profiling method. The ablation characteristics of CIGS changed drastically depending on laser wavelength, which in turn governed the depth resolution. These results suggest that the short optical penetration depth of a UV laser alone does not guarantee a corresponding enhancement of depth resolution, but the ablation mechanism and resulting surface morphology by different wavelength lasers are critical.

Fig. 6 Depth profiles of In, Ga and Mo with respect to shot number: (a) UV, (b) VIS lasers (Insets show the normalized Mo signals)

Fig. 7 Cross sectional profiles of the creaters produced at different laser shot numbers with the (a) UV, (b) VIS lasers

As a technique for quality control during manufacturing of CIGS thin film solar cell of which performance is sensitively influenced by material composition, LIBS analysis was carried out for varying laser spot diameter conditions. It is demonstrated that the elemental com-position of CIGS thin film can be predicted with high accuracy (< 5%) by LIBS with a spot diameter comparable to scribing pattern size. It is also shown that LIBS signal intensity ratio can be nearly independent of spot diameter for properly selected line pairs 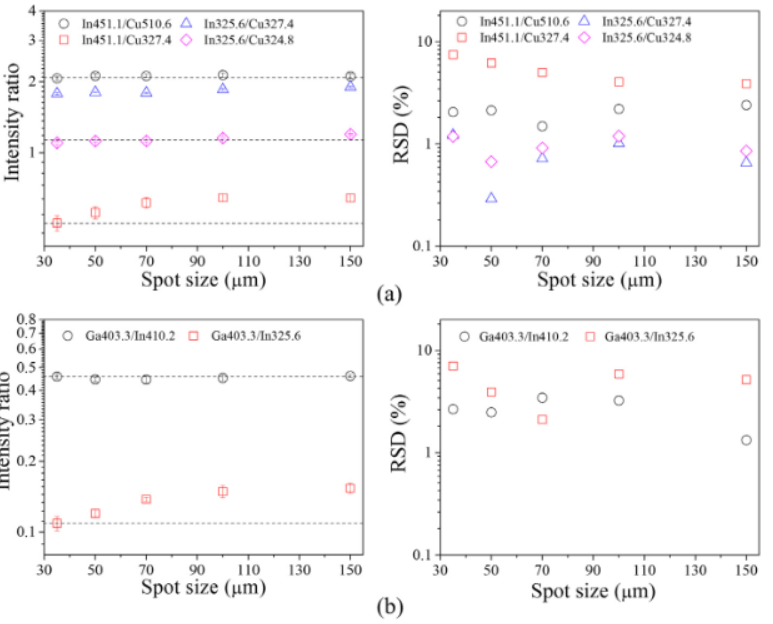 Fig. 8 Variations of the LIBS signal intensity ratios and their RSDs of (a) In-Cu and (b) Ga-In line pairs.

Ablative laser removal of melanocytic nevus is widely performed for skin therapy owing to the benefits of clinical convenience and favourable therapeutic results, especially in cosmetically and functionally critical areas where surgical excision generally leaves a disfiguring scar. However, it has also been reported that an incomplete removal of nevus during laser therapy resulted in high recurrence rate and the formation of pseudomelanoma, a superficial spreading of benign lesion that histologically resembles a malignant melanoma

Malignant melanoma is acknowledged as the most dangerous form of skin cancer, accounting for 90% of the deaths associated with cutaneous cancers. Mohs micrographic surgery is widely adopted in dermatology, in which the process of cancer excision and histologic examination is repeated until no cancer cells are found from the excised layer. One of the shortcomings of the Mohs procedure is the prolonged operation time due to repeated histology test during the surgery, which increases the risk of complications such as wound infection. LIBS technique can classify biological samples in short time and performed in air with little or no sample preparation with high-spatial resolution.

In our laboratory, we study difference in concentration of major components of darkly and lightly pigmented skin, elemental mapping of melanoma and surrounding tissue by LIBS technique which has potential of clinical verification for melanoma cryostat sections, or other types of skin cancer

Animal models, a black silkie chicken whose skin has a characteristic natural dermal hyperpigmentation and a distinct high concentration of melanocytes around follicles is a possible candidate for LIBS analysis for the differentiation of melanocytic nevus and surrounding normal skin. 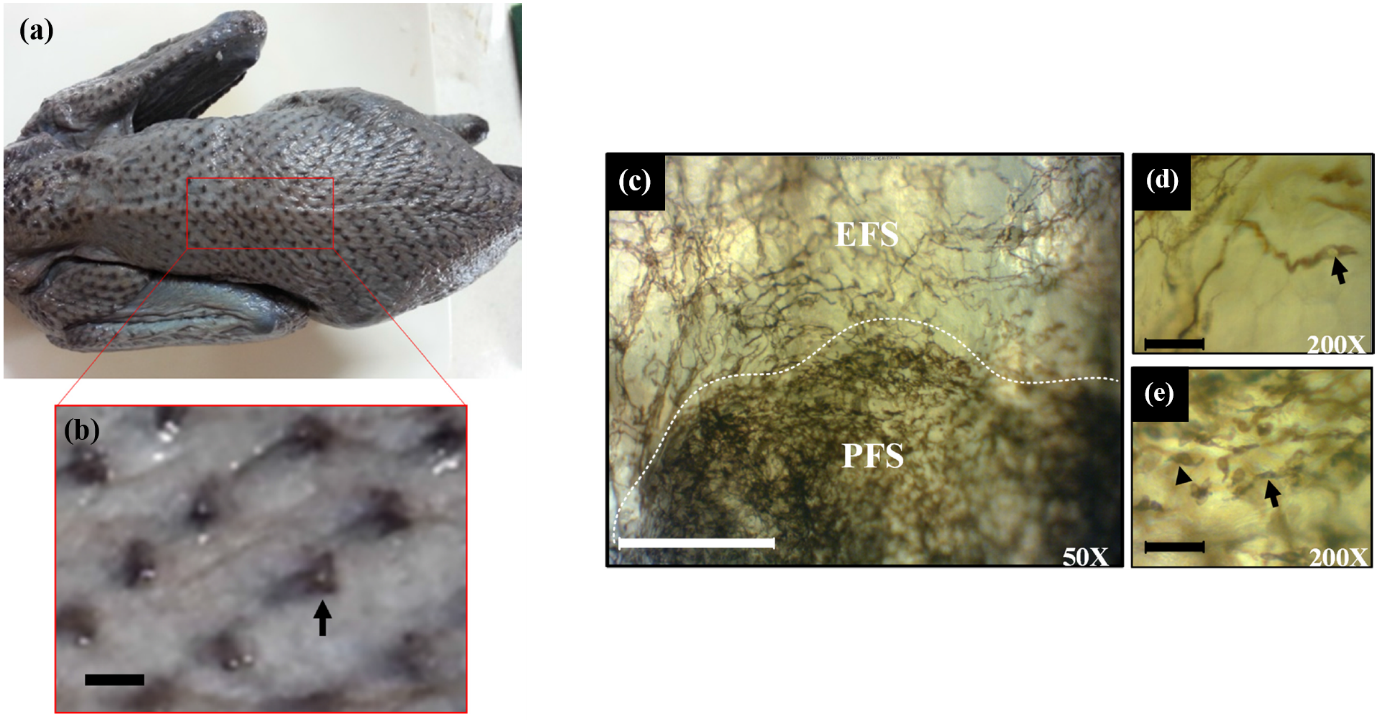 It is clearly observed that the spectral intensities of Ca2+ and Mg2+ lines of the PFS region are higher than those of the EFS region, whereas those of Na+, Cl–, and K+ lines are lower in the PFS region. Since the intensity change of Ca2+ and Mg2+ peaks with respect to skin pigmentation level shows an opposite trend to that of Na+, Cl–, and K+ lines, the difference of measured LIBS signal intensities between the EFS and PFS regions can become clearer if the ratio of spectral intensities between these two groups of elements, such as Ica2+/INa+, is compared.

Fig. 10 (a) Clinical image of a mouse after 10 days of subcutaneous melanoma cell implantation, (b) procedure for LIBS sample preparation, and (c) optical image of the melanoma tissue section for LIBS elemental mapping.